Group B Streptococcus colonization in mothers from Karachi, Pakistan

An estimated one in five pregnant women around the world carry Group B Streptococcus (GBS) bacteria which is a major, yet preventable, cause of maternal and infant ill health globally. GBS is not a sexually transmitted disease and can be found in up to a third of adults, usually with no symptoms. In women, GBS can live harmlessly in the digestive system or lower vaginal tract, from where it can be passed to the unborn baby through the amniotic fluid or to newborns during labour.

Babies are more vulnerable to infection as their immature immune systems cannot fight off the multiplying bacteria. If untreated, GBS can cause serious infections, such as meningitis and septicaemia, which may lead to stillbirths, and newborn and infant deaths. If they survive, babies can develop permanent problems including hearing or vision loss, or cerebral palsy.

Current GBS prevention focuses on giving antibiotics to women in labour, aiming to reduce disease in infants at delivery. At least 60 countries have a policy for antibiotic use in pregnancy to prevent newborn GBS disease. Of those, 35 have a policy to test all pregnant women to see if they carry GBS, and the remaining 25 countries identify women with clinical risk factors. However, implementation of these policies varies around the world.

GBS is a leading cause of neonatal sepsis in many industrialized countries but reports from the developing world infrequently identify this pathogen among newborns with sepsis. Although there is significant geographic variation in the proportion of women colonized with GBS, the range of colonization reported from developing countries is similar to that identified in populations studied in the United States.

The first comprehensive study of the burden of GBS, funded by a grant from the Bill & Melinda Gates Foundation, included data and estimates for the year 2015 from every country of the world, including outcomes for pregnant women, their babies and infants. Previous data on GBS burden focused on infant cases and high-income countries, but the impact of GBS disease worldwide, especially in Asia, was less clear.

This research found GBS to be present among pregnant women in all regions of the world, with an average of 18% of pregnant women worldwide carrying the bacteria, ranging from 11% in eastern Asia to 35% in the Caribbean, totaling 21.7 million in 195 countries.

Too many parents around the world face the death of a baby or a young child – avoidable GBS deaths are happening in every country. Antibiotics currently prevent an estimated 29,000 cases of early-onset Group B Streptococcal disease per year, almost all in high-income settings. However, this approach may be difficult in low-income settings where many births take place at home, and laboratory capacity for screening for GBS is limited. This is a potential contributor to a distortion in the role of different bacteria as causes of neonatal sepsis (especially in the newborn), with environmental pathogens being more likely to be identified in such cases. This is particularly pertinent for early-onset invasive GBS disease (EOD), the underestimation of which has been highlighted from a myriad of evidence synthesis reports from many resource-constrained countries.

In an effort to address this paucity of knowledge, researchers from the Aga Khan University, Karachi, Pakistan, Drs Fyezah Jehan and Imran Nisar, alongside colleagues Javairia Khalid and Usma Mahmood, in collaboration with the U.S Centers for Disease Control and Prevention (CDC) and Dr Saad Bin Umar from Yale University, embarked on a study to define the prevalence of GBS colonization in pregnant women at term-delivery in low income settings of Karachi, Pakistan. This investigation aims to address some of the knowledge gaps to better inform the epidemiology of GBS in a low-income setting. The study will also hone in on some of the critical limitations of current data from low-middle income countries by using standardized methodologies for evaluating GBS colonization.

This study focusses on pregnant women who deliver at term (≥37 weeks of gestation age). For the current phase of the study, only women delivering by normal vaginal delivery will be included.  Gestational age staging will be determined by extrapolation of the date of last menstrual period and corroborated by physical examination of mother and/or infant and/or ultrasound report if available. A lower vagino-rectal (VR) swab from the mothers will be collected for GBS testing and will be flash frozen using liquid nitrogen and transported to Infectious Disease Research Laboratory (IDRL) AKU where they are being analysed. To ensure quality, analysis will also be done at Yale University / CDC USA for all positive and negative specimens.

Whilst the results of our study will address some of the key factors which might influence susceptibility to developing EOD, it is not designed to specifically measure the incidence of invasive GBS disease. Nevertheless, the present approach will try to clarify some of the postulated reasons which have been offered (in the absence of compelling evidence) for the differences observed in incidence of invasive GBS disease in low income settings. 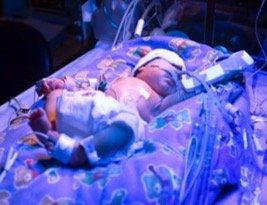 BORN TOO SOON; Group B strep as a cause of preterm birth

By Javairia Khalid, Lecturer, The Aga Khan University, Pakistan Each year on November 17th, World Prematurity Day is observed to raise awareness about preterm birth and what these babies and their families face across the Read more…